Songs from the Age of Ruin 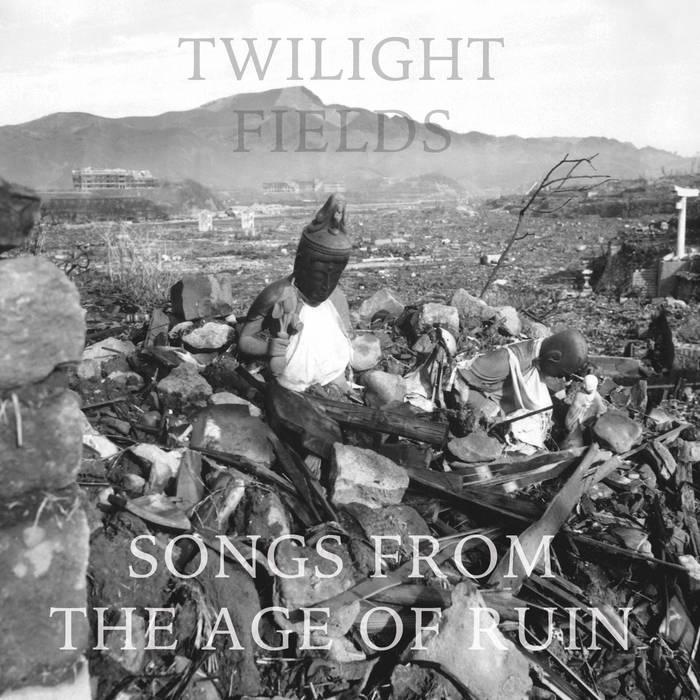 wc_helmets Twilight Fields here takes his combination of progressive, dream pop and 80s alternative and really turns up the folk to tell a message that is frightening, direct, and necessary. Wonderful arrangements and artful production adorn every track. Best album full of mellotrons you'll hear all year. Favorite track: Lazarus.

The year 2019 finds the human species standing at a crossroads, with only two possible directions: survival or extinction. It is the proper place of artists to contribute their strong and clear voices to dialogues that could lead to our survival and renewal.

“Songs from the Age of Ruin” is an uneasy but compelling song cycle that begins with the bombing of Hiroshima and the absurdities of the atomic age and proceeds to tackle such difficult topics as homelessness and economic inequalities (“Lazarus”), the evils of populism and political repression (“Demagogue”, “Taken Away”), the toxicity of social media communication (“Offended”), animal rights (“The Animal’s Song”), and the utter stupidity of war (“Soldier Song”). It concludes with a three-part “climate change suite” (“Why Did We Do It?”/“Loss”/“Barren Planet”) that lays bare the tragic human consequences of catastrophic climate change.

In order to convey these sorrowful, angry messages, Twilight Fields utilizes a wide range of genre influences such as progressive rock, folk and folk-rock, psych rock, post-rock and shoegaze.

“Songs from the Age of Ruin” is a warning to the present and an apology to a possible future.

Allister Thompson of Twilight Fields says: “Growing up, certain passionate, activist musicians were very influential to me. So much so that I’d say they changed and shaped the person I would eventually become. In addition to my usual ambient, dream-pop and progressive rock influences, this album pays grateful homage to such artists as New Model Army, Billy Bragg, Killing Joke, Midnight Oil, and The Levellers, as well as older influences like Leon Rosselson, Bob Dylan, Robert Wyatt, and Phil Ochs. There has never been a more crucial time for musicians to step up and add their voices to the chorus of reason necessary to take us back from the brink of total destruction.”

REVIEWS:
"Cloaking dream-pop motifs and evocative shoegaze in something subtly sinister and spectral, it is easy to see why the Canadian [band] tell listeners to 'look for party rock elsewhere.' But what it lacks in good-time disco grooves it more than makes up for with its aqueous beauty."
- Prog Magazine

"Thompson, whose vocals often recall Tim Booth of James, covers plenty of sonic ground, from folksy laments (Taken Away, The Animals Song, The Holy War), propulsive alt-rock (the catchy Lovers In A Dangerous Time), and ambient instrumentals (Maximum Darkness) all of which cultivates a mood that is alternately hopeful and fretful."
—Smells Like Infinite Sadness
smellslikeinfinitesadness.com/twilight-fields-songs-from-the-age-of-ruin-review/

"It’s a timely album, dealing with the modern versions of age-old issues and doing so in interesting new styles...remember when music could entertain and inform in equal measure, when it could raise more questions than it answered, when it gave you something to think about? I do and thankfully Twilight Fields does too. Maybe it’s not too late after all!"
—Dancing About Architecture
dancingaboutarchitecture.info/2018/12/27/songs-from-the-age-of-ruin-twilight-fields-reviewed-by-dave-franklin/?fbclid=IwAR25sT9WHFVGN7cZrqSlz44IcwtsWh0-KFfsGxIpausjxcCAuaKdffE2Vko

Demagogue single:
"A loud and clear attack on demagogic politicians and their deceitful modus operandi to misinform people and create hate,
non-solidarity and inequality ... the president of The Divided States Of America, comes to mind but it’s actually about the evilness of the universal and timeless DEMAGOGUE. About nationalistic ‘Me, Myself and I‘ leaders worldwide. Gripping song, alarming video clip…"
—Turn Up the Volume!
turnupthevolume.blog/2018/12/08/twilight-fields-about-the-eternal-fight-against-the-demagogue/

Demagogue single:
"...a creative blend of indie rock with a hint of Krautrock and it all adds up to the idea that protest song is alive and well."
—Stereo Embers
stereoembersmagazine.com/stereo-embers-track-of-the-day-twilight-fields-demagogue/?fbclid=IwAR0xZfoX9FIjKDJOdNTXwJAvt7T3UaxHlHAyC4p1rs5DWcbi5Iji6HjP_A8

Demagogue single:
"What a hard hitting song. When we keep silent about the abuses of a demagogue, we become that demagogue, and we are just as guilty...one of the most politically charged songs since Dylan and Pete Seeger. The whole album is brilliant."
—Audio Fuzz
audiofuzz.com/see/politically-charged-twilight-fields-demagogue/?fbclid=IwAR0pTSxnqIZCotaQ6EVPdxnpgEzGMERXfNAYXo13JvbdAUUNVwa00klXf10

review of "Why Did We Do It?"
"Lament and anguish are painted with acoustic guitar, piano, mellotron, and electric guitar strokes on a progressive folk rock textile, as Allister holds nothing back in his direct heartbroken portrayal of one of the last humans in their doomed journey for survival in a dying world, seeing nature decimated around them and abandoning their dead beloved."
—RIde the Tempo
ridethetempo.com/2019/01/17/listen-twilight-fields-why-did-we-do-it-the-last-ones/

"The instrumentation is sweeping and broad, painting a picture perfect complemented by their stunning vocals and lyrics. This is an album that recounts our failures but encourages us to do better."
—Indie Voice Blog
www.lamusiccritic.com/indie_voice_blog/get-it-or-forget-it-lost-cousins-shayfer-james-el-palacio-de-linares-eric-brace-peter-cooper-and-thomm-jutz-twilight-fields/?fbclid=IwAR3I1dBsuabsUtgu5tQjF40Jy-2oEyIdeU1cdRrwlOszy-NlbPqWYAKLESM

PLEASE note: I’m happy to receive your money, but ‘name your price’ means free if you have no money to give- just enter 0 dollars and download.

Bandcamp Daily  your guide to the world of Bandcamp

Featured sounds from Fly Lo and Ahmed Idris, plus Mother Nature hops on to drop off new project